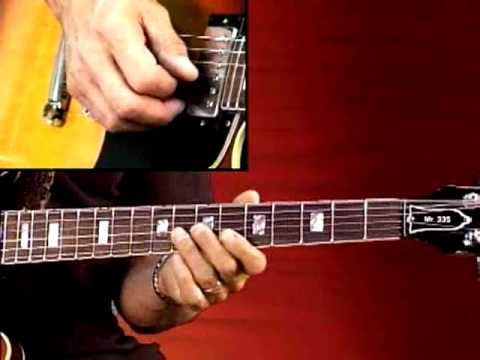 Now let’s take the rhythm work we just laid down for this Bb shuffle and work out an approach for the improvisation and solo.

The rhythm part featured an Ab chord with a Bb in the bass for the I chord, which feeds me an interesting idea for the solo. Though the chord itself (Ab/Bb, or “Ab over Bb”) doesn’t sound dissonant, there’s a lot of tension between an Ab and a Bb chord since they’re one step apart.

I developed the melodic approach using just an Ab triad and a Bb triad. Try it yourself using just the three notes of a triad (root, 3rd, and 5th) for two neighboring chords.

For the IV chord, my approach was similar only this time I used Db and Eb triads. It’s amazing to hear how such cool melodies can leap out of just two chord shapes!

I also found that the sus chords in the rhythm part also made me want to dig into some chromatic ideas. Chromatics can color up your solo, so long as you know where the line is ultimately going to end. Best bet is to target a chord tone from the change you’re going to land on.